It's been apparent for a couple of years now, but I have only given it a reasonable amount of thought during the last week.

Technology is developing at a phenomial rate. What we can do with computers now is far beyond what was once possible with computers which filled entire rooms. Our phones are now catching up, despite being tiny in comparison to a desktop computer.

But what I have come to realise, is that every time I've got a new computer, laptop or phone, it has actually been bigger than the last, despite the fact the same technology of years before can now be shrunk down to a minute size. 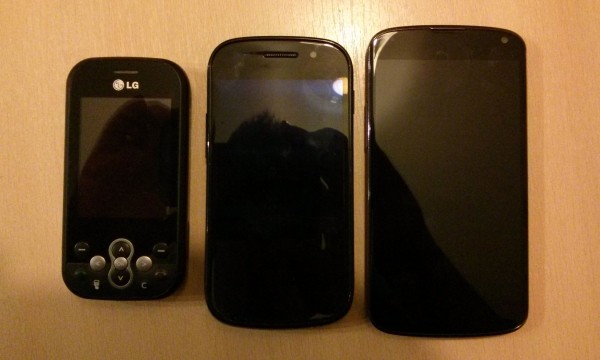 One thing to bare in mind is that while components get smaller, there are also a lot more now, such as light sensors, compasses, barometers (Not sure why my new phone needs that), accelerometers, GPS, gyroscopes, etc.

What happens if we run out of space in our devices for all of these components? A bigger screen! 2013 is meant to be the year of the "phablet". Phablets are phones with 5 inch or larger screens which replace the need for having a phone and a tablet. I personally think its just an excuse to get more space behind the screen to put in more gadgets and components.

A side note: Don't take pictures of mobile phones directly under a light. They show reflections. I'll never be a professional photographer!