Playing with a Raspberry Pi, and installing Chromium Browser

I managed to find more time to play with my Raspberry Pi and just generally learn what it can do as a cheap PC. It is obviously not meant to be the fastest machine in the world, but I am honestly very surprised.

It starts up in a similar time to my Windows PC (Phenom II quad core), despite it's 700MHz single core processor, using an SD card as a harddrive, and by today's standards, practically no RAM.

As with any Linux machine, it is easy to have a choice between command line or a desktop environment. The Debian packaged installed on my RPi came with LXDE. To get to the desktop environment from startup (If you've not set it up to automatically start LXDE from startup), simply type the following into the terminal:

Then after a few seconds of waiting watching commands scroll up the screen, you are greeted with a rather large raspberry.

The first thing I wanted to do was test it's browsing capabilities. The Debian package comes with Midori. Unfortunately I was disappointed with Midori. It loaded things at an ok speed, but I was suprised how different some websites look without CSS3 and HTML5 support. GMail had to be run in the basic HTML view too.

So, I decided to install Chromium Browser! Slightly different to Google Chrome, but pretty much the exact same browser, it proved to perform just that little bit faster than Midori as well as better support for HTML5 and CSS3 (The internet looks normal again!).

Almost as easy as starting the desktop environment, installing Chromium was very simple. Again in the terminal, type the following:

Wait for it to display some information, when asked to confirm, type "Y" and press enter, and Chromium will be installed. 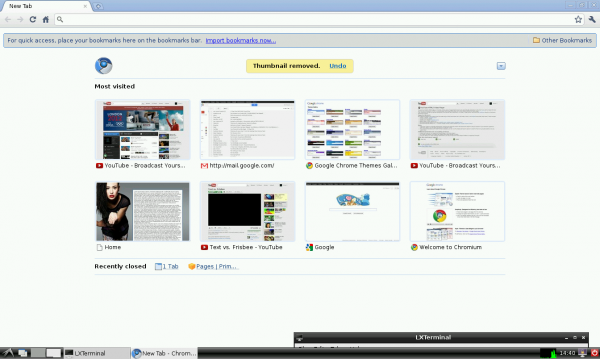 My first impressions of the Raspberry Pi is that it really does not act it's price. It can do a lot of the basic every day things we all use computers for; light browsing and checking email. It's also helped me get a bit more into the Linux side of things, and I have to say I'm enjoying it (But until it can support all of my PC games, Windows will rule my computing life)!